Some very large and stressful issues came up in regards to the supporting structure of our house. While we know that our house is proving to be a challenge for our builder and the subcontractors, the most recent issues had nothing really to do with the fact that our house is shaped differently.

We caught several mistakes made by our carpenter, specifically on the main beam that supports the whole interior of the house. The result was that the beam had started to twist. Distressing to say the least. Once we noticed this problem, we went through the house and print and found some missing hardware and several other areas that needed attention from our framer.

Gaps between the joists and the support beam.

The pieces of wood attached to the joist are called scabs

The problems loomed large in front of us and we were very upset. The response from our builder was a strong desire to correct any issues, but he and the carpenter also pushed back on the seriousness of the situation. How to fix everything became the next question. We were annoyed that much of it came down to our direction on how to address the problems, but the biggest one, the main beam, was outside of what we felt comfortable making the call on.

T got in contact with out local township building inspector to have him come out and look at the beam and give us suggestions on what he would accept come building rough inspection. We also wanted to have some official backing on our side of the fence when talking to our builder. Roland came out and said yes, it would not pass building inspection as it was but he isn’t an engineer and suggested we get with the building engineer that originally stamped the print. He also asked that the engineers report be supplied to him before we called for rough building inspection.

The problem with that suggestion is that said engineer is in California and to be frank, missed a bunch of problems with the print he should have caught. Toby and I weren’t keen on using him, and we wanted to get someone local if we could so they could actually come look at the house.

Now, my husband is an engineer, and we are friends with a bunch of them, but none are of the special flavor of structural engineer. We asked our builder if he had any local contacts and he did have one, but he hadn’t needed to use him in several years and he might be retired. I said get in touch with him and see.

The engineer angels must have been helping us out, because while Wally Street was indeed retired from his job doing structural engineering for commercial and industrial properties, he still dabbled as a hobby in residential work and other small contracts. He came out and looked at the beam and agreed with T and I on every item. The engineer, our builder, the carpenter, and I spent almost two hours on site going over everything. Wally did a thorough inspection of the entire house, finding another issue with the second floor railing that is to be corrected as well. Once he was back in his office with the print, he found another problem, this time with the print itself, that necessitated a new beam underneath the kitchen to support the weight of the tile floor that is going in later. Engineer’s report in hand, we have a plan for tackling all errors.

For all the anger and worry regarding all the issues, I will say this. Our builder, once he got past the initial pushback and realized that indeed these were not just fluffy simple problems, has been nothing but conciliatory. I try to hold judgement on folks not in whether or not they make mistakes, but in how they respond to those mistakes. I feel that John our builder has been pretty good about handling these hurdles. I am struggling to come to the same conclusion with our carpenter. While his attitude surrounding the repairs is fine, we have grave misgivings about his attention to detail going forward. Indeed, we discovered yet another mistake this week when part of the concrete Hardie board siding was installed upside down, with the rough edges exposed and the embossed “nail here” showing. A stupid, preventable mistake. Every mistake costs us money, material, time, and stress.

So this has not been a great month for our dome. I was hoping the exterior finishes would get completed. While the siding is complete barring the area that will have to be torn out and reinstalled, the brick is only at about 80%. Winter finally decided to show up and the sub zero temperatures makes finishing that anytime soon impossible. 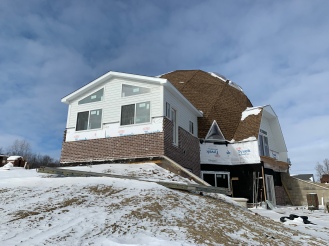 Brick progress on the south facing side

The east (road) facing side 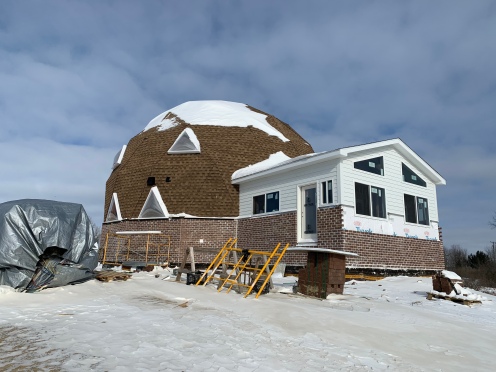 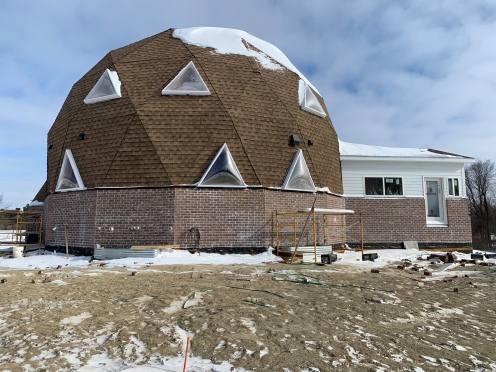 Brick on the west side only needs the limestone sill plate.

We are getting close to finalizing the rough inspections left, electrical only has low voltage left to install and the repairs to the structure need to be in place completely before we can call Roland back out to get the rough building inspection. Once we get those, we need the weather to warm up a bit because the insulators (the next step) can’t work when it is this cold, the foam doesn’t expand or stick when the temps are so low.

T and I did get a chance to build the exterior stairs to the front door. High point of the month for me.

Here is hoping February is kinder to us.

Walking up into the house is much easier now 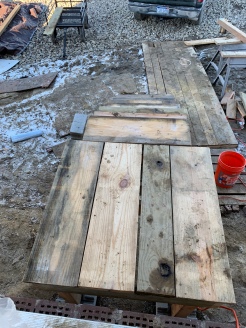 These are temporary stairs so they aren’t connected to the house.

A temporary furnace to keep things above freezing inside 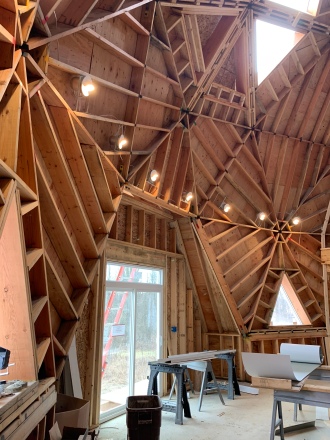 The lights are tiltable to give us light right where we need it. 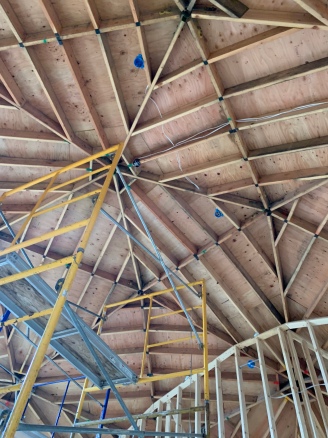 Due to it not being secured properly, this is just a temporary rail. It will be removed and reinstalled with a sturdier structure when drywall begins